Fruita | Eulogy for Phil Rutledge
[Notes: Text in blue below was added in Fruita after discovering on arrival how the Huey Memorial had been configured with Phoenix markings and tail number 307, which was the Stewart-Doody-Bobo-Robertson ship. Gestures are noted only for those who weren't there, to help paint the scene. Eulogy was inserted into the program as the first speaking position, between the Pledge of Allegiance and Taps, which helped identify and connect the Phoenix to the Memorial - and then in turn to Phil - for the thousands who were there and would not otherwise have understood the connection or the significance.] 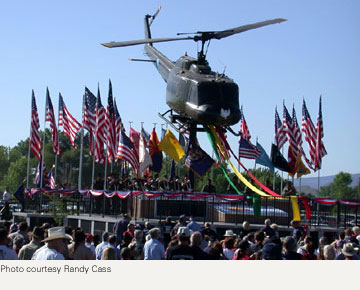 I'd like to thank the Memorial Committee for squeezing room into the program for us on very short notice.

To provide some background, Jim Doody's brother Tom [gesture to Jim on podium] was a member of our unit in Vietnam, the Phoenix of the 101st Airborne. Our ships had blue circles on their tailbooms for unit identification, just like this one [gesture back to Huey].

Those who track such things tell us we had among the highest losses of any helicopter unit in Vietnam.

Many of the Phoenix gathered here today from all over the country [gesture to special Phoenix seating area] were part of the same mission on the day Tom was shot down - his ship was immediately behind my own in that long formation, and several others here were right behind him.

Returning to the present, one is missing from our group of young lads gathered here today.

Phil Rutledge - callsign Phoenix 38 - arrived a few months later and never knew Tom. Phil was very much looking forward to being here today, and just a month ago we made plans to travel together from California.

His wife considered being here in his place but told me - just this Monday - it would be just too hard.

One of Phil's most memorable stories occurred as our base camp at Camp Evans, in the northern part of South Vietnam near the DMZ, was being shut down in late 1971.

A large Phoenix bird that hung in our officer's club - it looked just like the one on the nose of that ship [gesture back to Huey] - was taken down, and on it was written the names of all who had ever worn the Phoenix patch.

Then they took it outside and burned it - returning the Phoenix legend to ashes and marking a lasting close to our unit's history in Vietnam.

Of the Phoenix pilots lost over the years since that time, nearly all have been in aircraft accidents, and each of them - like Phil - had a lot of flight time and experience.

The famous book "Fate is the Hunter" describes very eloquently the many joys - and perils - that go with a love of flying and a career in aviation - but which often tempt the odds just slightly too far.

Phil had been looking for a way to quit flying and still make a living, but his time just ran out.

There won't be many other occasions like this as the bell rings for each of us in our turn, but we can all remember being privileged and fortunate enough to have been here today - and to share in the memory of such a fine unit and all the good men we've been honored to know and to fly with.

We will remember them all for as long as we keep telling their stories.